Role of CIMA and the Cayman Islands

As a leading and competitive international financial centre, the Cayman Islands has established its regulatory framework based on relevant international standards of supervision and co-operation with both local and overseas regulatory authorities.

The Cayman Islands Monetary Authority plays a central role in the fight against money laundering and terrorism financing. Section 6(1)(b)(ii) of the Monetary Authority Act gives the Authority legal responsibility, as part of its regulatory function, “to monitor compliance with the anti-money laundering regulations.” These regulations prescribe measures to be taken to prevent the use of the financial system for the purposes of money laundering and terrorist financing. In addition to the Anti-Money Laundering Regulations (AMLRs), the regulatory framework against financial crime in the Cayman Islands includes the Proceeds of Crime Act, the Terrorism Act and the Proliferation Financing (Prohibition) Act.

The Cayman Islands has implemented the Financial Action Task Force’s (FATF) 40 Recommendations on the Prevention of Money Laundering and the Countering of Terrorist Financing, which are international standards for effective anti-money laundering and counter terrorist financing regimes. In 2017, the Cayman Islands were assessed against FATF’s 40 Recommendations. The mutual evaluation report can be found here.

The Anti-Money Laundering Steering Group is the governing body responsible for the general oversight of anti-money laundering (AMl) and countering the financing of terrorism (CFT) policy in the Cayman Islands, as stated in section 5 (2) (a) of the Proceeds of Crime Act. It is also responsible for the general administration of the FRA; for promoting effective collaboration between regulators and law enforcement agencies; and for monitoring interaction and co-operation with overseas financial intelligence units.  Other national stakeholders responsible for developing the national AML/CFT strategy and policy include the:

In addition to the Authority, the Department of Commerce and Investment is a public sector supervisor with responsibility for monitoring compliance with the AML/CFT framework specifically for real estate agents and brokers, and precious metals and stone dealer .

The Registrar of Companies is responsible for the oversight of non-profit organizations that pose a high risk of being misused for terrorism financing.

Finally, the intelligence, law enforcement and prosecution functions are performed by the Office of the Director of Public Prosecutions (ODPP), the FRA, the Cayman Islands Customs Department (Customs) and the Financial Crimes Unit (FCU) of the RCIPS. 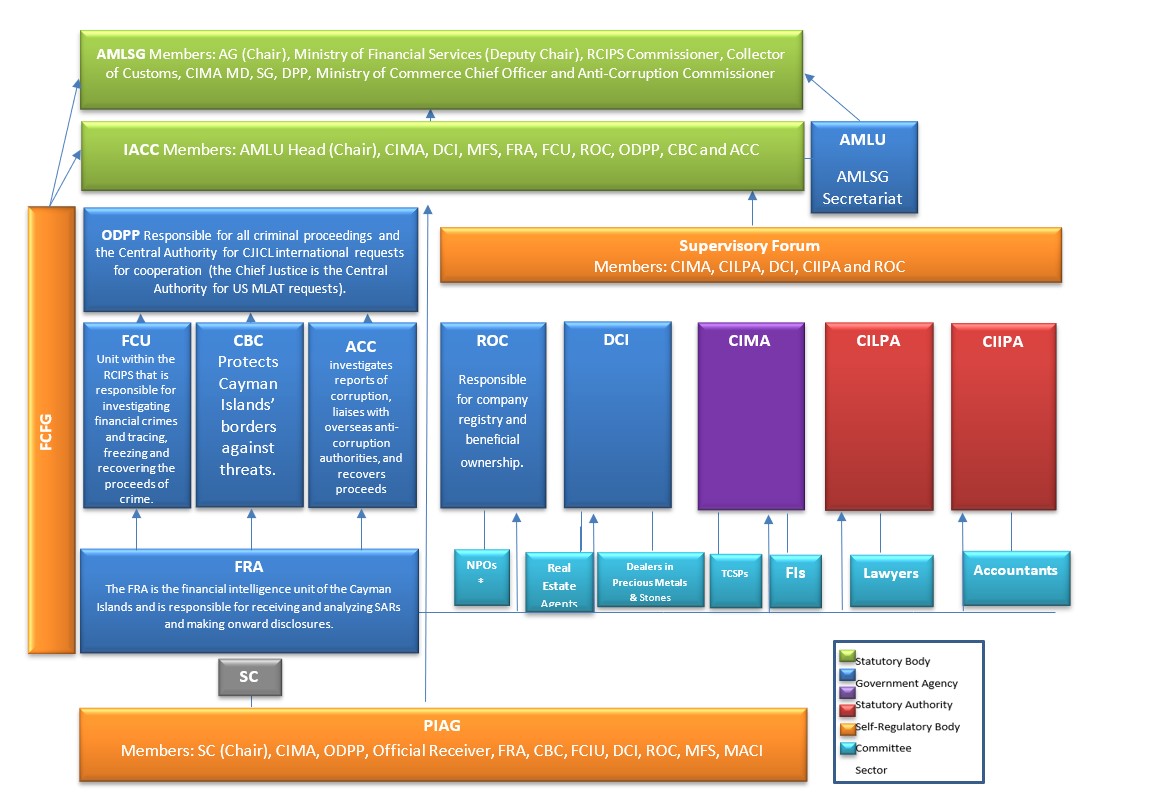 The AML/CFT legal and regulatory framework of the Cayman Islands is responsive to emerging risks and is informed by the themes from the National Risk Assessment and the resulting national AML/CFT Strategy. The goals of the strategy include:

The key legislation and regulations in support of the Cayman Islands efforts to combat money laundering, terrorism financing and proliferation financing are described below:

Furthermore, failure to make a disclosure regarding another person who is engaged in criminal conduct and tipping off, meaning where an individual knows or suspects that a disclosure is about to take place, is taking place or has taken place and the individual makes a disclosure which is likely to prejudice any investigation, are also offences.

The Anti-Money Laundering Regulations (AMLRs) require all persons engaged in relevant financial businesses, as defined in the Proceeds of Crime Act, to have in place systems, policies and procedures to implement a strong AML/CFT/CPF framework in their organisation, including procedures for:

Financial service providers that do not comply with the AMLRs may be subject to an administrative fine imposed by their supervisor or to criminal prosecution.

This Act requires that a person who knows or suspects or has reasonable grounds for knowing or suspecting that another person has committed a terrorism financing offence, based on information the person received in the course of a business in the regulated sector, make a report to the Financial Reporting Authority (FRA) or the person’s money laundering reporting officer, as soon as possible. Failure to do so constitutes an offence.

Failure to do so may result:

The FRA, in relation to any country, has been given powers to issue directions to any relevant persons; and persons operating in the financial sector, concerning the unauthorised financing of proliferation once they meet the conditions expressed in section 5 of the Proliferation Financing (Prohibition) Act.

The GNs should be read in conjunction with the regulatory laws and more importantly, with the legislation pertaining to the AML/CFT framework of the Cayman Islands. The GNs are an important feature of the AML/CFT regime of the Cayman Islands and non-compliance with them will be taken into account by the Courts in determining whether a person has breached the relevant provisions of the Proceeds of Crime Act  or the AMLRs; and by CIMA in determining whether to exercise any of its enforcement powers for breaches of the AMLRs.

The Proceeds of Crime Act states that in deciding whether a person committed an offence under this section the court shall consider whether the person followed any relevant guidance which was at the time concerned - (a) issued by the Monetary Authority; and (b) published in a manner approved by the Governor in Cabinet as appropriate in its opinion to bring the guidance to the attention of persons likely to be affected by it.

The AMLRs provides that in determining whether a person has complied with any of these regulations a court - (a) shall take into account any relevant supervisory or regulatory guidance which applies to that person; and (b) may take into account any relevant guidance issued by a body in the islands that regulates, or is representative of, any trade, profession, business or employment carried on by that person.