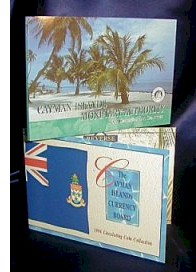 The Cayman Islands dollar is divisible by one hundred cents. There are four denominations of circulating coins, the 25¢, 10¢, 5¢ and 1¢ coins.

All coins bear a portrait of HM Queen Elizabeth II on the obverse side. The coins minted before 1986 feature her portrait done by Arnold Machin. In 1986 an updated portrait by Rafael Maklouf was used. Since 1999 the coins bear a portrait by Ian Rank-Broadley. The design as it appears on the reverse side of the coin remains unchanged from the original issue. However the composition of the coins was changed once in 1992.