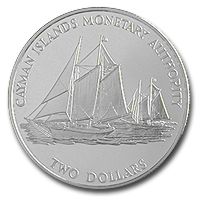 To mark its establishment, the Cayman Islands Monetary Authority commissioned the Royal Mint to strike a limited number of silver Proof $2 coins.

Reflecting a seafaring history, the special commemorative $2 Proof coin bears a beautiful illustration of two Caymanian built schooners, the Arbutus I and the Goldfield, modeled by Royal Mint engraver Robert Elderton. The Schooner, a very important part of Caymanian heritage, is a sailing vessel constructed mainly from Cayman mahogany and other local woods, renowned for its speed and efficiency when sailing off the wind. Widely used before the advent of steam and motor vessels for turtling, fishing and transportation to the United States, it contributed greatly to the economic development of the Islands, as one of their principal sources of revenue.

The obverse features the elegant portrait of Her Majesty the Queen by Raphael Maklouf.