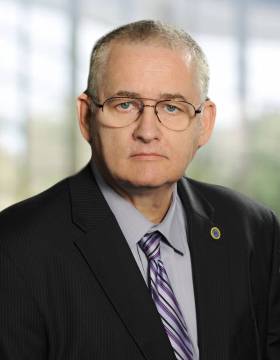 Mr. Scott MacLaren’s appointment took effect in October 2009.  As Deputy Head of Information Systems (IS), his responsibilities include assisting Head of IS, Mr. Charles ‘Chuck’ Thompson, in streamlining business processes while formulating and implementing IS strategies and policies for all divisions in CIMA.  With a focus on business continuity and security, he is responsible for implementing measures to safeguard the IT systems and the vast data critical to CIMA’s operations.

Prior to joining the Authority, Mr. MacLaren worked for the Cayman Islands Government Computer Services from 1988-1993. Starting as a Support Analyst, he ended his employment with them as the Systems Support Manager.

After leaving Computer Services, Mr. MacLaren ran a local IT consulting firm that managed large-scale IT projects for government and private companies. An accomplished programmer and network specialist, he has over 27 years of fulltime experience in the Information Technology field, and has written many software packages.

Mr. MacLaren graduated with honours from the Information Systems Management programme at Langara College in his home city of Vancouver, Canada.