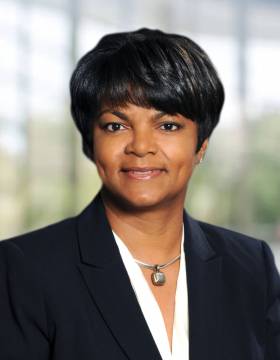 Mrs. McLean was appointed Deputy Managing Director- Supervision on 1 September 2014. With more than 25 years of financial services experience she has oversight of the Authority’s regulatory divisions, including its onsite inspection function.

As the former Head of Banking Supervision Division, Mrs. McLean represented the Authority and the Cayman Islands in various meetings with international regulatory and standard setting bodies such as the IMF, CFATF, and FATF. She also represented the Cayman Islands on the Basel Committee on Banking Supervision Division’s working group on cross-border banking, which established the initial standards for customer due diligence for banks.

After heading the Banking Supervision Division of CIMA for five years, Mrs. McLean left the Authority in 2005, to take up the post of Chief Compliance Officer with CIBC FirstCaribbean International Bank, responsible for the regional Bank’s regulatory compliance program across 17 Caribbean markets. During her stint in the private sector Mrs. McLean also served as a Director of the Cayman Islands Bankers’ Association for four years.

In her current post as Deputy Managing Director – Supervision, Mrs. McLean reports to the Managing Director and has responsibility for the day-to-day oversight of the Authority’s four regulatory divisions – Banking, Insurance, Investments and Securities, Fiduciary Services, as well as the Onsite Inspection Unit. She also regularly represents the Authority at various local and international supervisory and industry forums.

An MBA graduate from the University of the West Indies, Mrs. McLean also holds a Bachelors of Science Degree in Business Management from Florida State University and is also a Notary Public.