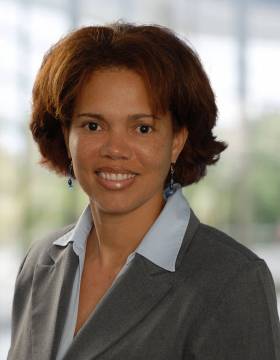 Ms. Moxam-Murray is responsible for the effective operations of the Finance Division of the Authority. This Division is responsible for the collection and processing of the fees due from the Financial Services Industry, and providing regular administrative, technical and financial support to the Authority. The production of financial statements, reports, and budgets in compliance with the Public Management and Finance Law, and other statutory laws are also the responsibility of Ms. Moxam-Murray and her team.

She began her career in 1985 as a trainee accountant at Cable and Wireless having been selected as a recipient of the company’s accounting scholarship. During an 18-year career with Cable & Wireless, she rose to the post of Financial Controller, and received the company’s Annual General Manager’s Award for Excellence in 2001. Prior to joining the Monetary Authority she held other positions within both the private and public sector.

Ms. Moxam-Murray has served on various boards, mainly in financial positions, including the Chamber of Commerce Pension Plan, the Agriculture Industrial Development Board, the Health Insurance Commission, the Telecommunications Co-operative Credit Union, and on various church and school PTA committees.